Showing posts from September, 2010
Show all

September 28, 2010
Prof. William Wheaton of the Massachusetts Institute of Technology, expects the housing market to come roaring back in the next few years. He gave his views today on CNBC's Squawk on the Street. The reason, he explains, is that household formation is creating demand that is far greater than the current rate of new home construction. Foreclosures and excess inventory are not so much of a problem because they are filling in the demand between new home construction and new household formation.

The market is poised for a comeback even without the range of mortgage products that existed prior to August 2007, the professor says. He points out that in the past people were able to buy homes before the new mortgage products were available.
Post a Comment
Read more 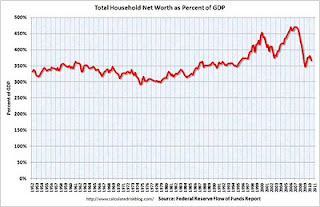 The Federal Reserve has released its Flow of Funds report for the second quarter of 2010. Household net worth declined $1.5 trillion to $53.5 trillion.

At the First Quarter 2009 trough, the loss in household wealth had declined $17 trillion from the 2007 peak.

With home prices expected to be headed for a double dip, these trend lines may head back down again.

In the chart above net worth of households and nonprofits is expressed as a percent of GDP.

Read more of an analysis of the trends in household wealth at The Business Insider: http://www.businessinsider.com/household-net-worth-2010-9#ixzz101zh0bCN

The Flow of Funds data can be found at this link: http://www.federalreserve.gov/releases/…
Post a Comment
Read more

September 19, 2010
On September 17, Home Depot chairman and chief executive officer Bernie Marcus appeared on The Squawk Box on CNBC. He was interviewed by show host Joe Kernen. Marcus lambastes the "academics" who have positions of power in Washington (including President Obama) and their view of job creators as "monsters" and "villains." Marcus facetiously "apologized" for creating 320,000 jobs.

Now you take some of the people the President surrounded himself with, now think about it a second, they’re all academics . . . most of them . . . I mean all of them, they come out of Harvard they come out of Yale. These guys are all on tenure. By the way they’re all on tenure. Tenure means they get paid whether they work or not, tenure means they are on insurance for life, tenure means they don’t ever have to worry about anything just because they were there for a number of years. America is not that way. America is not that way. And if the President got…
Post a Comment
Read more

September 11, 2010
In an interview by Larry Kudlow, Senator Judd Gregg (R-N.H.) explained why the Obama Administration and the Democratic Congress are not worried about the huge run-up in the deficit and rising national debt.

In his September 9 program host Larry Kudlow pointed out that the Obama Administration has increased the national debt by more than all prior Presidents from George Washington through Ronald Raegan. When Senator Gregg suggested this was going to bankrupt the nation, Larry Kudlow disagreed.

“Senator, instead of going bankrupt, you know what will happen?” Kudlow said. “It's a massive tax trap. That's what's going to happen. It's going to be a gigantic humongous, massive tax trap that will doom us to subpar, stagnant, slow economic growth and high unemployment. Isn’t that really the issue?”

“Larry, you're absolutely right,” Gregg responded. “This is a very important point for your viewers to understand. This spending is being done intentionally. The reason the GDP –th…
Post a Comment
Read more

Senator Corker and the Dodd-Frank Bill

September 01, 2010
Senator Bob Corker (R-Tenn.) went to extraordinary lengths to reach across the aisle to forge a consensus financial regulatory reform bill. After making considerable progress in a cooperative effort at crafting a bill, Senator Corker's efforts were cast aside. Instead, Senator Chris Dodd (D-Conn.) went ahead with a purely partisan bill that, only with very minor compromises, obtained enough Republican support to pass. This is another legislative behemoth that will have enormous unintended consequences.

Read an interview with Senator Corker and his views on his experience and the new legislation at this link: