Showing posts from 2013
Show all

Kyle Bass on China: Brakes on Credit Expansion by Banks and Shadow Banks Will Slow Economy

Below is the transcript of a recent interview with J. Kyle Bass, founder and principal of Hayman Capital Management in Dallas, and Richard Howard, managing director and global strategist with Hayman.

Richard Howard. I think the growth in Total Social Financing [in the central government’s official data] comes the closest to capturing all that shadow banking activity

Kyle Bass: Which is a number they do release.

Q: You cite in your letter that Total Social Financing is now growing at nearly 22 percent a year as of April – and that the total size of Chinese credit system…
Post a Comment
Read more

Bostanjiev: Now Is Good Time To Invest in Russia

Bostanjiev says that due to the situation in the U.S., now is a good entry point for the "emerging markets investor" and says the Russian "story is still very constructive".

Lloyd Blankfein: The Fed Should Taper

September 18, 2013
In an wide-ranging exclusive interview, CNBC's Andrew Ross Sorkin talks with Lloyd Blankfein, Goldman Sachs chairman & CEO, about cuts in the Fed's bond-buying program; the move higher in interest rates; the trade in gold; the best candidate to head the Fed; joining the Dow, and how regulations are impacting the banking industry.

Interview is from Chicago on CNBC's Squawk Box, September 18, 2013.


more from our guest host sandy weill, of the weill cornell medical college. hopefully you saw that interview we had a little while ago. i'm glad i'm here this time. you do have a much more nuanced view. i'm going to try to summarize a little bit. it provides a capital that allows us to deliver the prosperity for this country. i don't think if you could figure out a way to do it quickly and easily with good regulations, you're open to a lot of different things, basically more capital and, you know, better lending standards. absolutely correct. but the -- to tarnish bankers and put them all in the same penalty box, which we talked about earlier doesn't help anyone. or they can't trade and they're not going to be able to trade. what will happen to our capital markets? right. how do you determine what is for customer and for your own account? i also picked…
Post a Comment
Read more

August 23, 2013
San Francisco Fed President John Williams told CNBC the timing of the taper must depend on the economic data. He added that tapering should begin later this year, if the economy progresses.

He refused to say when, but added: "Any tapering ... we do would be in gradual steps over time ... assuming our forecast comes true." 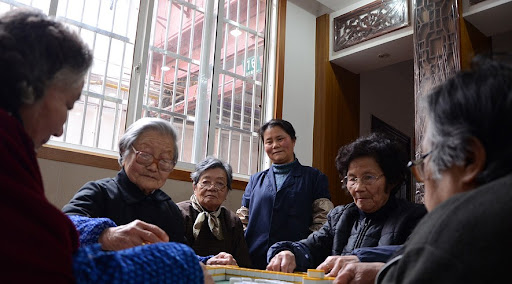 They call themselves "orphan grandparents" -- elderly people whose grown children have left for jobs in other cities, putting stresses on China's traditional three generation households. Here, a group of elderly women meet for a game of mahjong at the Xintu Center for Health Promotions in Shanghai. Photo: Mike Hricik/Penn State University/MCT By Mike Hricik
McClatchy Tribune Newspapers
July 24, 2013SHANGHAI — Yan Meiyue, 90, said her 72-year-old daughter rarely visits. She doesn't even come home at the annual Spring Festival when families traditionally get together. Yan has been a widow since her husband died nearly 10 years ago. She now spends every weekday at a modest community center near her home. There she plays the Chinese board game mahjong and eats meals prepared by a volunteer staff.“The volunteers keep us company,” Yan said with a smile. She is one of a rapidly growing number of “orphan grandparents” who say they feel abandoned by their younger relatives, leav…
Post a Comment
Read more

"Tyler Durden" at Zero Hedge reports how Achuthan challenges the conventional wisdom that the economy is doing well and how the anchors of the show, especially Tom Keene, defend their view. At 1:05, Achuthan stuns the Bloomberg anchors - "We believe that a recession began last year. Time will tell if that call is correct."  To which they retort...  "The jobs situation is great" [LA] ...the job market is not doing well, all headlines aside. When you – I think the core thing here, and something that concerns us quite a bit, is the types of jobs that make money. So if you happen to be between the age of 35 and 54, since this so-called jobs recovery began three-and-a-half years ago, you’ve actually seen job losses, not gains, okay?
Job losses for 35 to 54 year-olds approaching a million jobs lost. Now that happens to be, that 20-year s…
Post a Comment
Read more

July 16, 2013
In an exhaustive study of Fannie Mae and Freddie Mac, British author Oonagh McDonald concludes that the two government-sponsored enterprises led the way in pushing down lending standards for the entire mortgage industry from the early 1990s onward. Their role was largely concealed from the public eye because they hid the ongoing erosion of lending standards in a black box underwriting system that was manipulated internally to approve loans for borrowers with bad credit and who could not be shown to be able to repay the loan. The banks and Wall Street followed their lead, according to Dr. McDonald.